Accompanying the release of “Snowden” in Germany, we conducted a ticket giveaway. The lucky winners have already been drawn and will be notified shortly.

There’s now another chance to get tickets. Accompanying the release of “Snowden” in Swiss cinemas, we are giving away 10 × 2 tickets for the exclusive screenings listed below, which are followed by a panel discussion.

After the screening, there will be a panel discussion (30 minutes) with Marcel Bosonnet (Snowden lawyer Switzerland), Patrick Walder (Amnesty International), and host Jan Jirat (WOZ).

After the screening, there will be a panel discussion (30 minutes) with Marcel Bosonnet (Snowden lawyer Switzerland), Patrick Walder (Amnesty International), and host Gabriel Brönnimann (TagesWoche).

To get a ticket, simply send an email with your name and the subject “Snowden Bern” or “Snowden Basel”, respectively, to news@threema.ch. Tickets are given away on a first come - first serve basis. Good luck!

The new Threema version for Windows Phone includes the following changes and additions: 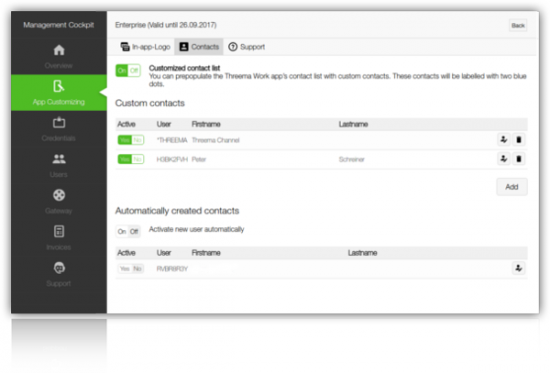 With these new features, Threema Work is even more useful. If you aren’t familiar with Threema Work, now is the time to find out what it’s all about: Visit the website

Today, “Snowden” hits the big screen in Germany. We were able to watch Oliver Stone’s highly anticipated movie about the famous whistleblower last week, and we think it turned out very well, to say the least.

In summer 2013, when working at the NSA, Edward Snowden uncovered the largest mass-surveillance program of the world. Stone’s movie skillfully recounts the events surrounding what has since become known as the “Snowden revelations”. The movie shows what dramatic consequences Snowden was willing to accept in order to expose the dark deeds the intelligence services were engaged in. Without his intervention, we would probably to this day be unaware of the extent to which mass surveillance and targeted spying on politicians, business leaders, and human-rights activists was conducted.

“Snowden” was well received by the political press, too. The New York Times and the Washington Post praise Stone for managing to make a complex social issue graspable for all audiences.

In cooperation with Universum Film and Pathé Films, we are giving away 30 × 2 tickets for “Snowden” (valid in Germany or Switzerland). To enter the giveaway, simply subscribe to the feed “Snowden” in the Threema Channel: First, add the Threema ID *THREEMA to your contacts; then, send the text “Snowden” and you automatically enter the contest.The deadline is September 30, 2016. All decisions are final. Good luck!

For the development of our iOS apps, we are looking for a motivated software engineer (m/f) to join our team. It's required to have relevant qualifications and experience in developing complex apps. The job description can be read here.

The new Threema version for Android includes the following additions: 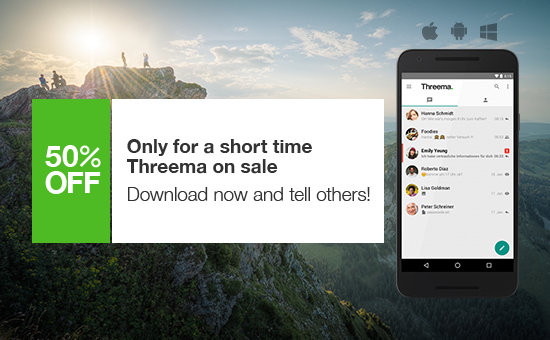 In the last few days, many new users joined Threema. The daily downloads have skyrocketed when WhatsApp announced that it will start sharing its users’ data with Facebook. Learn more…

With this special sale, we aim to bring attention to data-privacy issues and help indecisive users to switch to Threema.

Tell others about the special sale: use our email template 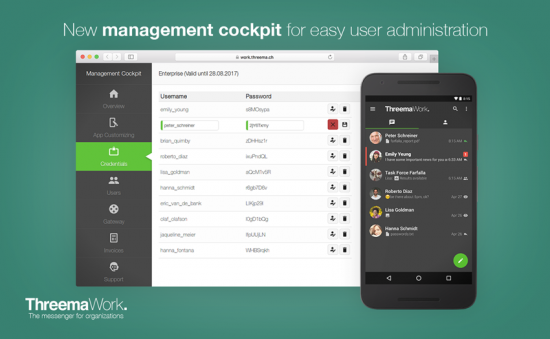 Threema Work, the chat app for organizations, has been successfully launched.

Now, Threema Work gets a new and intuitive management cockpit which allows system administrators to conveniently manage and control Threema Work via the web browser.

With the new management cockpit for Threema Work covers the following features:

Check out the new management cockpit by logging in and selecting an active subscription. 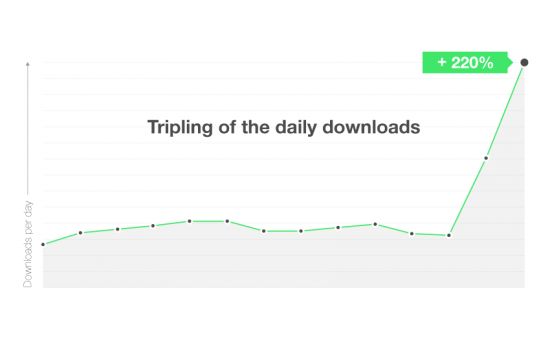 It’s official: WhatsApp shares the phone numbers of its users with Facebook. This marks another significant diminishment of users’ privacy. Once again, the saying holds true: “If you’re not paying for it, you’re the product.”

Is there a way to opt out of this data sharing? No. While it seems to be possible to prevent the use of said data for ad targeting on Facebook, “that data will still be shared”, as TechCrunch points out.

Threema, on the other hand, doesn’t require users to provide their phone numbers (or any other personal information, for that matter). Hence, it’s possible to use Threema completely anonymously. If you do decide to synchronize your contacts, their phone numbers will be transferred in hashed form and only matched while in volatile memory, not stored. Data sharing is ruled out.

Due to its rigorous data restraint, Threema provides the highest level of privacy protection out of all popular mobile instant messengers. Decentralized management of groups and contact lists, the option to use it anonymously, and all-inclusive end-to-end encryption render Threema the best choice for privacy-conscious users.

Many users seem to have recognized the signs of the times and are switching to Threema. Over the Weekend, the daily downloads of the Threema app have more than tripled (see chart). 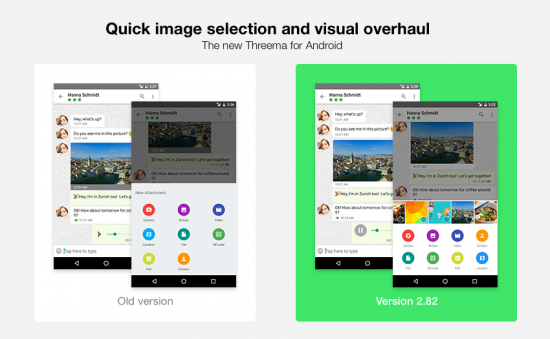 Threema for Android now features image quick select *, which allows to send images in a snap. Simply tap the paperclip icon to invoke the attachments popup, and you're presented with your gallery's most recent images and animated GIFs. Select one, and you're done. Should you have trouble finding the right image, tap and hold a thumbnail, and it will expand to a preview of the image. If you prefer to, you can disable image quick select completely in Settings > Chats.

Furthermore, design and usability of the chat view have been overhauled and unified. For example, captions are no longer shown as overlay, they are appended below images, and no matter the format, all media types are now neatly displayed in the same manner.

Besides the chat view, many other areas of the app have been improved, both visually and in terms of usability. We think you'll like Threema 2.82 for Android.

iOS users get a new Threema version. The update 2.7.3 brings the following changes:

Due to the proposed revision of the BÜPF (Federal Law on the Surveillance of Post and Telecommunications Traffic), Switzerland is in the midst of a heated debate about so-called “preventive surveillance”. In light of this, we asked the readers of our blog – as part of a small competition – to present their arguments against mass surveillance.

We have received a large number of submissions, and we would like to take this opportunity to thank everyone who participated! The five entries that convinced us the most will receive a print edition of George Orwell’s prophetic book “1984”. (The winners have already been notified.)

One concern that was frequently expressed is the self-censorship that mass surveillance might lead to. Another one is the inherent potential for misuse of the collected data.

Have a look at our compilation of the strongest arguments against mass surveillance!

Threema is known for its dedication to privacy. It is – and always has been – possible to protect access to the app with a PIN. Now you can also protect individual chats from prying eyes. Simply mark a confidential conversation as Private Chat, and your PIN or fingerprint will be required to access it. Private Chats can also be hidden from the chat list. This way, full confidentiality can be maintained, say, while you're showing someone Threema’s (other) cool features. In line with this, push notifications for Private Chats don't include message contents. Learn more

The 2.81 update also includes some performance improvements and bug fixes.

The wait is over, Threema 1.6.0 for Windows Phone is now available. This update introduces a new gallery for easier media management, message and media forwarding to other contacts and groups, and the option to save media files directly to OneDrive. On top of that, the update includes general improvements and numerous bugs fixes increasing stability and performance of the app.

For all the details, please visit the change log.

Threema 2.7.2 for iOS is now available. This update supports text formatting. You can now spice up your messages by writing words in bold, italic, and strikethrough type. To do this, simply enclose a word or a sentence in the appropriate character: * bold *, _ italic _, and ~ strikethrough ~.

Additionally, the update contains performance improvements and fixes some bugs.