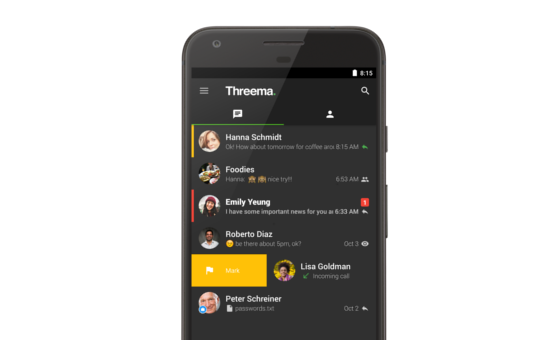 A new Threema version for Android is ready for download. While the 3.21 update is primarily focused on under-the-hood improvements, it also includes a new feature that might come in handy.

If you ever wanted to create a reminder for unresolved issues in a conversation, you can now do so with visual markers. In the chat overview, simply swipe right on a chat to mark it, and the chat will be labeled with a yellow stripe.

In addition to the ability to mark chats, the update introduces a range of further improvements. For more detailed information, please refer to the change log.

The latest Threema version for iOS addresses some bugs and includes small improvements in regard to Threema calls.

To learn more, please refer to the changelog.

Threema calls are here! Threema for Android and Threema for iOS now allow you to make end-to-end encrypted calls in brilliant voice quality – without disclosing your phone number.

Tap-proof and as privacy-friendly as it gets

Just like Threema messages, Threema calls are end-to-end encrypted and thus tap-proof. In contrast to conventional messengers, Threema doesn’t use a phone number as unique identifier. Instead, a randomly generated Threema ID serves this purpose, which means that no personally identifiable information is contained in metadata. Furthermore, it’s possible to make calls without disclosing one’s phone number to the called party.

The call connection is established using Threema messages in the background. Therefore, voice calls are just as trustworthy as chats, and the same verification levels apply. If possible, a direct connection between caller and callee is established (peer to peer), which improves the call quality considerably. Because a constant bit rate is used for audio encoding, no conclusions about the content can be drawn from the size of the transmitted data packets.

Several thousand enthusiastic Threema users have participated in the beta program. Due to the high demand as well as limitations by Apple, the quota of beta testers for the iOS app was reached within a few hours. The bug reports we received have enabled us to identify and eliminate minor bugs. Thanks to the extensive testing, Threema calls have gained high stability and reliability. We would like to thank everyone who helped testing Threema calls!

A new Threema version for Windows Phone has arrived. While the 2.0.0 update is primarily focused on bug fixes, there is now a convenient way to free up disk space.

Navigate to Settings > Media+Storage to delete all messages of a given time frame. To only delete old messages of a certain chat, select “delete messages” in the chat’s menu.

For all the details, please refer to the change log. 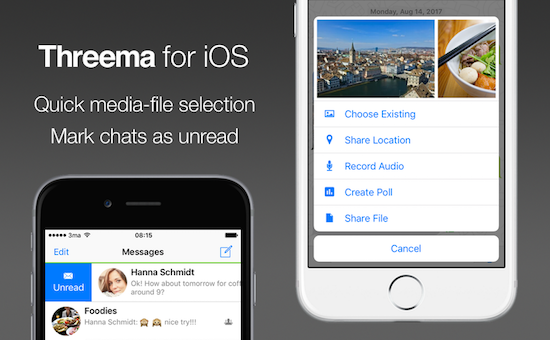 Just after Threema calls have entered the beta stage, Threema for iOS receives its next update. With version 2.10.2, iOS users get the following handy features:

Using quick media-file selection, you send images and videos in a heartbeat: Just tap the plus symbol in a chat, and you’re presented with the latest 100 images in your camera roll. To play a video, simply tap and hold its thumbnail.

Chats can now be marked as unread. This is useful, for example, to create a reminder if there are still unresolved issues in a conversation. In the chat overview, swipe right on a chat to mark it as unread, and the chat will be labeled with a red dot.

Using the same swipe gesture, unread messages can be marked as read without opening a chat.

This update also includes some other additions and improvements. For all the details, please refer to the change log. 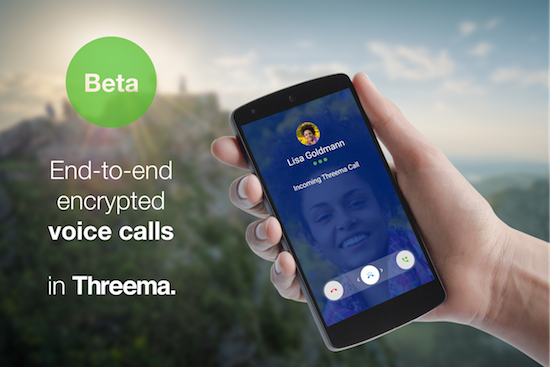 The question whether Threema can be used without access to the address book has been coming up a lot lately. The answer is “Yes”, of course.

According to Germany’s Right to Informational Self-Determination (“Recht auf informationelle Selbstbestimmung”), it is up to each individual to decide about the use and the disclosure of their personal data. Thus, if a messenger requires access to the address book, a potential user is confronted with two choices:

Unlike ordinary messengers, Threema doesn’t use the phone number to uniquely identify users. Instead, the Threema ID serves this purpose. The Threema ID is a randomly generated string; no conclusions about the user’s identity can be drawn from it. And since linking a phone number or email address to a Threema ID is optional, Threema can be used completely anonymously.

In Threema, users enable or disable contact synchronization at their own discretion. (Detailed information about contact synchronization can be found here.) It’s not necessary to grant Threema access to the address book. If no access is granted, contacts can be added manually by entering their Threema IDs or by scanning the respective QR codes.

As far as chat apps are concerned, there is a lot more to privacy protection than mere message encryption. Find out how common messengers hold up against Threema’s strict privacy standards in this comparison. 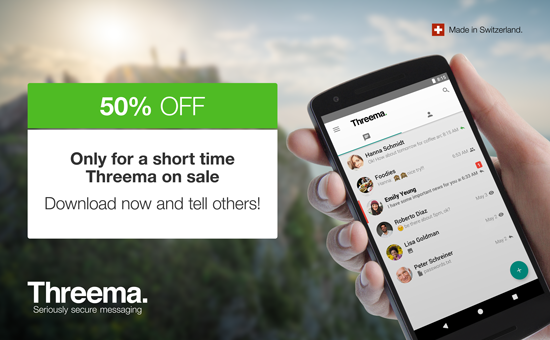 In the Google Play Store, Threema is currently showcased as “special offer”, and the app is on sale for a short time.

We are happy about the promotion; however, we don’t want to neglect the other platforms. Therefore, we extend the discount to the Threema apps for iOS and Windows Phone.

Until Friday evening, May 26 (CEST), Threema is available at half price for all platforms. 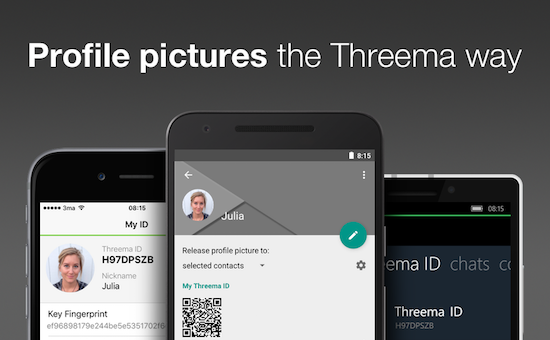 Threema introduces support for profile pictures. You can now add a personal touch to your appearance in Threema without compromising privacy.

The new feature allows you to set a picture that represents you in your chat partners’ contact lists. Setting a profile picture as well as displaying the ones your contacts have set is optional, of course. And if you set a profile picture, you can choose whether it will be sent to selected contacts only or to everyone with whom you chat.

Update to the latest Threema version for Android, iOS, or Windows Phone to enjoy privacy-friendly profile pictures. Details about the individual app releases can be found in the change log. 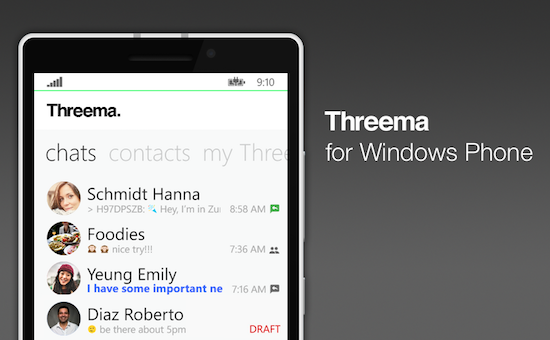 Threema 1.8.0 for Windows Phone is available for download. This update introduces quite a few new features:

Furthermore, the 1.8.0 update also includes some bug fixes and miscellaneous other improvements.

With Threema Gateway, Threema can be integrated into existing software applications. This allows companies and organizations to send, receive, and process Threema messages using their own software. Threema Gateway can be used for various purposes – the possibilities are virtually endless. Here are some real-world examples:

Besides the above-mentioned xenForo plugin, there are many other Open Source projects that use Threema Gateway, e.g., Grafana and Mattermost. 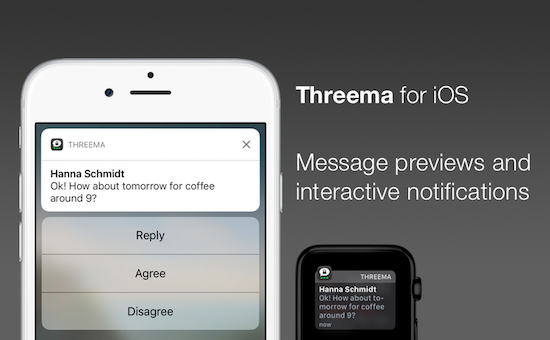 With Threema 2.9.0 for iOS, message previews can be displayed in push notifications. This feature requires iOS 10 or later and can be enabled/disabled in Settings > Notifications > Push Notifications. When receiving a push notification, Threema first downloads the corresponding message from the Threema server and decrypts it in the background in order to display a preview of the message content. To learn more about the security implications of enabling this setting, please refer to this FAQ article.

Besides other improvements, the 2.9.0 update also provides a handy date/time picker for easy scheduling of appointments in polls. Visit the changelog. 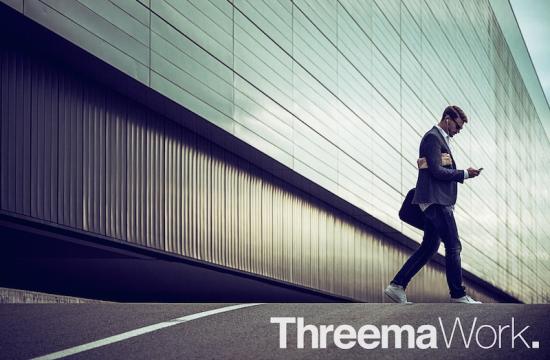 A few months ago, Threema Work was successfully launched. Threema Work is tailored to the internal communication needs of companies and organizations. With Threema Work’s unique management cockpit, even large organizations can keep full control over the use of the app.

We are delighted that Daimler AG has chosen Threema Work as internal messaging tool. Daimler AG is in good company. Many well-known corporations have already started using Threema Work. Numerous small and medium-sized businesses as well as public institutions have also opted for Threema Work.

Threema Work, the secure and privacy-compliant messaging solution for organizations, is now available for Windows Phone. Thus, Threema Work can now be used on all major mobile platforms.

Threema Work 3.11k for Android introduces support for Threema Web (as well as a new image editor). Messages and files can now be sent and received conveniently on the desktop. At this time, Threema Web is available for the Android version of the Threema Work app; support for other platforms is in preparation. Find out more.

Threema Web has already gained high popularity. With the help of the Threema community on GitHub, it has also received numerous updates already. The most important improvements at a glance: