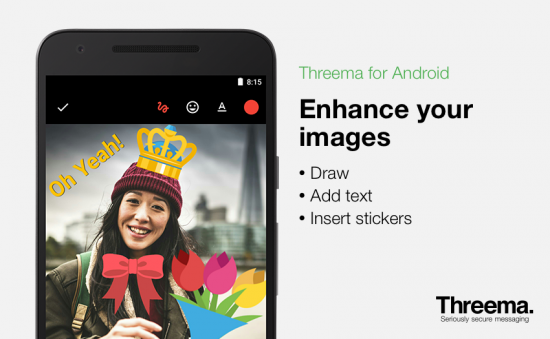 Threema 3.1 for Android introduces new image editing options. You can now spice up your images by drawing on them, adding text, and inserting stickers – without leaving the Threema app.

First, select the image you would like to send. In the preview, tap the paintbrush icon in the title bar to open the image editor. Draw whatever you like, add text, and insert, move, resize and rotate stickers. Tap and hold any item to flip it horizontally, bring it to the front, or delete it. Of course, you can also adjust the color of the brushstrokes and the text.

As always, the update includes some bug fixes and general improvements. Visit the change log.

A new Threema version for iOS has just hit the App Store. The 2.8.1 update for iOS introduces message drafts: If you compose a message without sending it, the message will be saved as draft, and it is indicated in the chat list that there’s an unsent message in that conversation. Furthermore, it’s now apparent at a glance which messages are new in a chat thanks to a divider bar.

This update also includes some other additions and improvements. To learn more, please consult the change log. 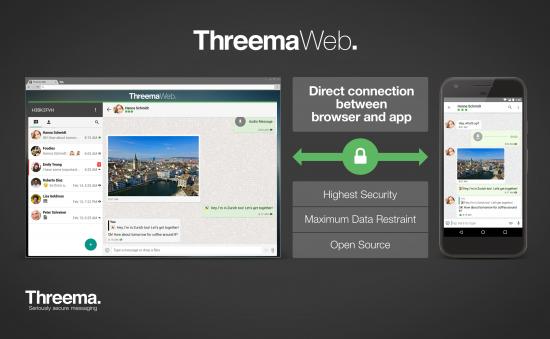 A new Threema version for Windows Phone is ready for download. These are the changes and additions the 1.7.0 update introduces: 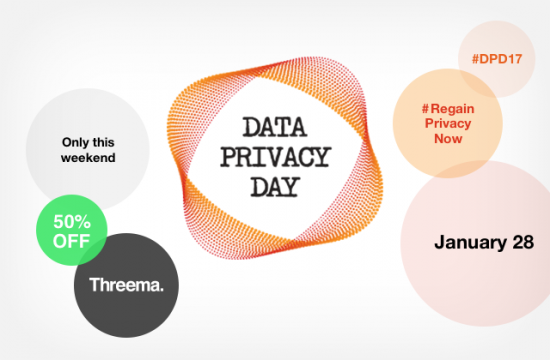 January 28 is Data Privacy Day. This holiday was established in order to raise awareness for data protection and to point out the dangers of a decline in privacy. Privacy awareness is more important than ever. In addition to surveillance programs by governments and data breaches, privacy violations by companies undermine the privacy of Internet users.

Users are often unaware of the amount and the kind of data they disclose by using certain online services. There’s also a lack of awareness for the consequences of giving up one’s privacy. Data is power. Once collected, data can be endlessly reproduced and stored until the end of time. What’s more, user data might lead to unforeseen conclusions about the users, especially when collected in large quantities and merged with data from other sources.

Threema was designed to generate as little data as possible in the first place. For where there is no data, no data can be misused.

The Data Privacy Day is a great opportunity to reconsider one’s communication habits. Threema is a valuable tool to ensure security and confidentiality of your communication. On the occasion of this year’s Data Privacy Day, the Threema app is available for half the price on all supported platforms.

Today, Threema’s web client enters the closed beta stage (limited to existing testers), and it will soon be available to all Android users. Support for other platforms will follow at a later date.

The public release of Threema Web is scheduled for early 2017. We will let you know as soon as the beta phase has been completed. Stay tuned!

A new Threema version for Windows Phone is ready for download. The 1.6.4 update provides a handy image picker which allows you to select images in a snap. On top of that, you can now send existing videos and set the resolution for videos you record in Threema.

As always, the update also includes some bug fixes and general improvements.

Threema for Android recently introduced a useful quote feature. With Threema 2.8.0 for iOS, this feature is now also available on iOS. Message quoting will come in handy in lively group discussions or whenever you need to unambiguously reference previous text messages.

To quote a text message on iOS, tap and hold it until the context menu appears. There, tap the quotation mark icon, and the quoted message will appear above the text input field. You can then compose and send your message like you usually would. In the chat, the quoted message is indented and prepended to your new message so that it’s evident what you are referring to.

By the way, the first Threema version was published exactly four years ago today. Thank you for all the support over the years!

A new Threema version for Android is available for download. The 2.93 update adds support for emoji skin colors and includes some minor improvements and bug fixes.

Emojis which are available in different skin colors are marked with a triangle. Tap and hold one of those to select which of its skin color variants to insert.

Mobile messaging is becoming increasingly important in today’s business communication. Frequently, however, chat apps are used which employees already use for personal communication. Many of these apps don’t meet legal privacy requirements and aren’t suitable for business purposes due to insufficient security.

Companies which are aware of the delicacy of this situation have switched to Threema Work, the secure and privacy-compliant messaging solution for businesses. All kinds of companies use Threema Work – well-known corporations, numerous small and medium-sized enterprises, and NGOs.

To promote the rapid spread of Threema Work, we are introducing a reseller program. Qualified IT service providers can now offer Threema Work directly to their customers and benefit from favorable resale and referral conditions. 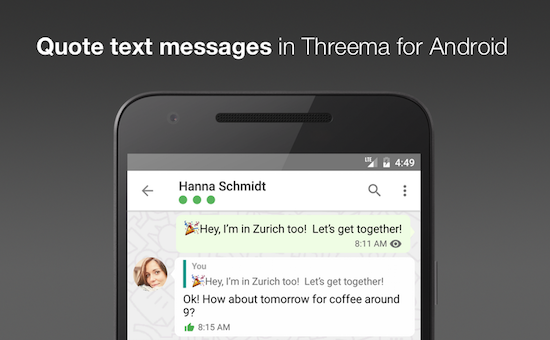 Threema 2.92 for Android provides a handy quote feature which allows to unambiguously reference previous text messages. This can be particularly useful in lively group discussions.

To quote a text message, tap and hold it until the context menu appears in the title bar. There, tap the quotation mark icon, and the quoted message will appear above the text input field. You can then compose and send your message like you usually would. In the chat, the quoted message is indented and prepended to your new message (as well as marked with the color corresponding to its author) so that it’s evident what you are referring to.

We have also streamlined the menus and revised the navigation. New chats, group conversations, and distribution lists can now be created via the Floating Action Button (and no longer via the toolbar). And for better usability, we have reorganized and consolidated the items in the side drawer.

On top of that, this update includes numerous other improvements and optimizations along with some bug fixes. For more details, please consult the change log. 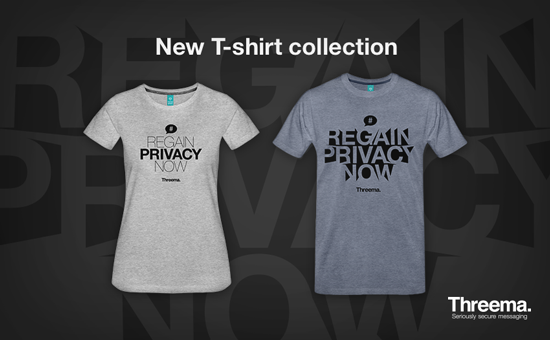 A new T-shirt collection has arrived in Threema’s Fan Shop. On the front of the two new T-shirts (available in both ladies’ and men’s style), the #RegainPrivacyNow hashtag is printed in different typographic variants. Now you can demonstrate in a fashionable way that privacy is close to your heart – literally.

Have a look at the new T-shirts and other cool Threema gear in our Fan Shop.

A new Threema version for Windows Phone is available for download. The 1.6.3 update is focused on bug fixes and general improvements.

IncaMail, Swiss Post’s secure email service, and Threema are connecting worlds. From now on, certain IncaMail messages can be conveniently received in Threema and Threema Work.

IncaMail is an electronic service from Swiss Post for the secure and verifiable sending of confidential business information, such as payslips, personal data, and account statements.

Confidential messages that are sent via IncaMail are seamlessly integrated into the Threema and Threema Work apps, making them immediately and securely accessible.

The integration of Threema into IncaMail will be of particular interest to companies and Threema Work customers.

Threema 2.91 for Android is now available for download. Scheduling appointments in group chats got even easier thanks to the new date/time picker for polls. Furthermore, this update addresses various bugs and includes minor improvements.