iOS users get a new Threema version. The update 2.7.3 brings the following changes:

Due to the proposed revision of the BÜPF (Federal Law on the Surveillance of Post and Telecommunications Traffic), Switzerland is in the midst of a heated debate about so-called “preventive surveillance”. In light of this, we asked the readers of our blog – as part of a small competition – to present their arguments against mass surveillance.

We have received a large number of submissions, and we would like to take this opportunity to thank everyone who participated! The five entries that convinced us the most will receive a print edition of George Orwell’s prophetic book “1984”. (The winners have already been notified.)

One concern that was frequently expressed is the self-censorship that mass surveillance might lead to. Another one is the inherent potential for misuse of the collected data.

Have a look at our compilation of the strongest arguments against mass surveillance!

Threema is known for its dedication to privacy. It is – and always has been – possible to protect access to the app with a PIN. Now you can also protect individual chats from prying eyes. Simply mark a confidential conversation as Private Chat, and your PIN or fingerprint will be required to access it. Private Chats can also be hidden from the chat list. This way, full confidentiality can be maintained, say, while you're showing someone Threema’s (other) cool features. In line with this, push notifications for Private Chats don't include message contents. Learn more

The 2.81 update also includes some performance improvements and bug fixes.

The wait is over, Threema 1.6.0 for Windows Phone is now available. This update introduces a new gallery for easier media management, message and media forwarding to other contacts and groups, and the option to save media files directly to OneDrive. On top of that, the update includes general improvements and numerous bugs fixes increasing stability and performance of the app.

For all the details, please visit the change log.

Threema 2.7.2 for iOS is now available. This update supports text formatting. You can now spice up your messages by writing words in bold, italic, and strikethrough type. To do this, simply enclose a word or a sentence in the appropriate character: * bold *, _ italic _, and ~ strikethrough ~.

Additionally, the update contains performance improvements and fixes some bugs. 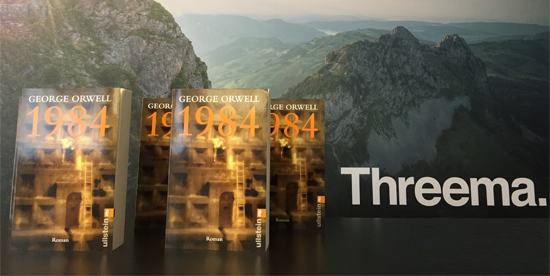 We are looking for the best arguments against mass surveillance. Lay out your argument and, with a bit of luck, win one of five copies of the book “1984”, George Orwell’s prophetic vision of a surveillance state.

The best arguments will be published anonymously.

With this contest, we aim to raise awareness of the negative effects and the futility of so-called “preventive surveillance”, and we want to make a contribution to the ongoing debate about the BÜPF referendum.

Threema Work is the instant messenger for organizations that care about data privacy and security but don't want to compromise on comfort and reliability.

Instant messaging is becoming increasingly important in business communication. Not only do co-workers frequently communicate using instant messengers; it's common that instant messengers are used for communicating with business partners and clients, too. The messengers that are employed might (or might not) be suitable for private purposes, but most often they don't comply with legal data-protection requirements and hence don't meet professional standards. Corporate solutions are rarely implemented because they are too expensive or not straightforward enough or hard to use. With Threema Work, Threema makes its famous security, ease of use, and metadata restraint available to organizations. This way, what is confidential stays confidential, and personal and professional communication is separated.

The open distribution model allows effortless cross-platform distribution of the Threema Work app to Android and iOS devices. You simply unlock any number of users and distribute the credentials to the intended users, without having to be concerned about which operating system a user's device runs on. Therefore, the open distribution model is also suited for organizations that don't have an MDM/EMM system in place. All the same, Threema Work can be easily integrated into existing MDM/EMM systems, allowing for automated remote configuration of the app. This provides full control over how Threema Work is set up on the users' devices and relieves users from setting up the app manually.

Threema Work is a comprehensive and inexpensive solution for organizations to make mobile communication secure and compliant with data-privacy standards. These are the benefits:

The scope of services depends on the choice of the service package.

Threema 2.8 for Android is now available. Among other improvements, this update introduces support for text formatting. You can now spice up your messages by writing words in bold, italic, and strikethrough type. To do this, simply enclose a word or a sentence in the appropriate character: * bold *, _ italic _, and ~ strikethrough ~. Support for this feature on iOS and Windows Phone is in the works.

The 2.8 update also includes various bug fixes and performance improvements. For all the details, please consult the change log.

Since WhatsApp started offering end-to-end encryption of message contents, we are often asked whether there are still advantages of using Threema. There’s a lot to highlight, which is why we have compiled a list of privacy-related features that set Threema and WhatsApp apart.

The sole encryption of message contents is insufficient as long as lots of metadata can still be collected because, as Stewart Baker (former NSA General Counsel) puts it:

“Metadata absolutely tells you everything about somebody’s life. If you have enough metadata, you don’t really need content.”

For this reason, Threema was designed from the ground up to generate as little metadata as technically possible. This is one of the key differences between Threema and other messengers.

Learn more about the advantages of using Threema here.

The new Threema version for iOS offers a share extension. This allows you to share images, videos and any other file from within other apps via Threema.

Threema for Android now displays animated GIFs directly in chat bubbles, both in group chats as well as in regular chats.

Furthermore, voice message playback was improved. We also added a new feature that allows you to simply clone existing groups and made it easier to manually add new contacts.

For further details about the changes in this release please consult the change log.

Spice up your chats!

Threema for iOS version 2.6.2 now displays animated GIFs directly in Threema’s chat bubbles, both in group chats as well as in regular chats.

We also improved the built-in video processing and were able to raise the maximum length of video messages to 15 minutes for moderate quality and 3 minutes for high quality videos.

In addition, the media browser was upgraded to give easy access to any media type including files.

With the latest update, Threema’s Windows Phone version gets some new features, the most important being the agree/disagree functionality: It allows to agree or disagree with an incoming message without triggering a push notification on the chat partner’s device. Instead, a “thumbs up” or “thumbs down” icon appears next to the corresponding message. This feature is now available on all platforms.

Media files (i.e., videos, pictures and voice messages) can use up a considerable amount of disk space. For this reason, the media management has been enhanced, allowing you to delete media files globally or on a per-chat basis, which makes freeing up disk space a snap.

If some of your group chats are reaching the limit of members, we have good news for you: The maximum group size was raised to 50.

Those are three of the functional improvements of the update 1.5.0, but there are visual enhancements, too. The chat wallpaper is now customizable, the default being our illustrative all-over pattern, and you can adjust the color of speech bubbles to your liking. 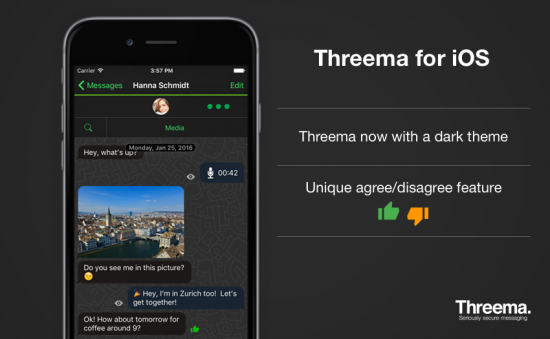 With its latest Android update, Threema introduced a new agree/disagree feature. This handy feature is now also available on iOS. It enables you to agree or disagree with an incoming message without triggering a push notification on the chat partner’s device. Instead, a “thumbs up” or “thumbs down” icon appears next to the corresponding message. This unique feature is not offered by any other messenger, which shows that – besides security – innovation is a driving force behind Threema’s development. The feature will be available on Windows Phone soon.

With its 2.6.0 update, the iOS version catches up with the Android version. Like on Android (and Windows Phone), there is now a dark theme available which looks sleek and elegant. Add to that the new chat wallpaper, which is another visual enhancement.

Furthermore, the maximum group size was raised to 50, VoiceOver support was improved to make Threema easier to use for the visually impaired, and thanks to the streamlined setup process, initially setting up Threema is now more intuitive and pleasant. 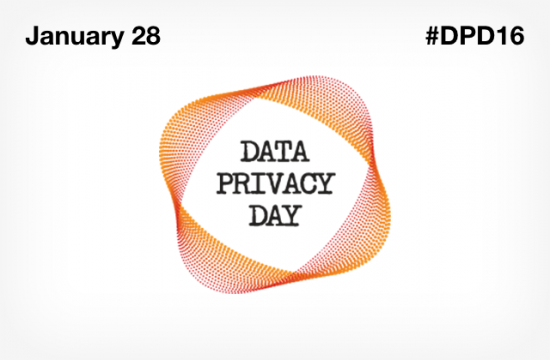 Due to frequent news about surveillance by governments, data breaches by companies and attacks by hackers, concerns about data privacy have been growing over the past years. The Data Privacy Day, which takes place on January 28 every year, aims to raise public awareness on the subject.

Data is power. Personal data that has been collected can be preserved indefinitely, it can be endlessly reproduced, and it might eventually fall into the wrong hands. Therefore, the best protection against data abuse is to prevent the generation of data in the first place. There are many services that protect user data, but Internet users need to care about their data in order to take the right measures.

Together with Tresorit and ProtonMail, Threema would like to help to raise awareness about data privacy. In view of the occasion, Tresorit has created a website that shows what user data is being collected by large online companies. The point is to remind us that our data has a high value for the companies we give it to, which might lead us to rethink our behavior. On Tresorit's Blog, the CEOs of the three companies also share some tips on how to protect one's online privacy.