We deeply regret that on Thursday, July 30, some of our customers were unable to use Threema in the usual way. Two unfortunate circumstances beyond our control led to these failures. In the interest of transparency, we would like to briefly explain the causes. We apologize to all Threema users for the inconvenience.

Issues with Threema 2.4.0 under iOS 7 and older

Threema version 2.4.0 was tested by us under iOS 7, 6 and 5, and worked fine using the available distribution methods for beta testing under these older iOS versions (i.e. installation via Xcode or AdHoc). However, it seems that the repacking/resigning that the App Store performs for distribution broke the binary and made it impossible to launch on iOS 7. Unfortunately this could not be verified before release, as Apple's official beta testing solution in the App Store, TestFlight, only works on iOS 8. We have submitted another update (2.4.1) on Thursday to fix the problem, which is currently waiting for review by Apple.

On July 30th, the Threema servers were unreachable for most users between approximately 10:10 and 12:30 CEST, except for a small percentage of users whose ISP had a direct route (peering) with our colocation provider nine.ch. The reason was a fiber cut that brought three data centers offline and destroyed the otherwise redundant uplinks. For details, please see https://status.nine.ch/en/messages/471. Threema’s infrastructure was up and running all the time, but unfortunately partly unreachable due to this network outage.

The new version 2.4 for iOS also support group chats with up to 30 members. All improvements and changes in the new release: What’s new

Threema just got even more useful. Android users are now able to send files of any type directly within the app. Any file with a size of up to 20 MB is supported including animated GIFs, music files, Office documents, PDFs or even contacts from your address book. As always with Threema, everything is fully end-to-end encrypted. This new feature is another step forward for Threema to make private online communication more secure, more productive and more fun.

There’s more in version 2.4 for Android: Group chats now support up to 30 members. All improvements and changes: What’s new

PS: If you’re using Threema on iOS or Windows Phone, don’t worry. We’re hard at work on preparing file transfer for your platform, too. Watch this space.

You won’t get privacy for free. But until Sunday, you’ll get it for less than a Dollar. Download Threema now for half off the regular price! The offer starts Thursday, June 18, and ends Sunday, June 21. Get Threema now for only $ 0.99 / € 0.99.

Threema, Germany's favorite secure messenger, is designed to keep messages, photos and all other data about you, out of the hands of hackers, advertisers and the government. With this temporary price reduction we would like to introduce Threema to a new audience. Help us to spread the word!

Tell your friends about the half off special offer: with E-Mail

Threema reaffirms its commitment to Microsoft's Windows Phone platform. Users benefit from an update that dramatically improves the the performance of Threema's Windows Phone app.

We're pushing the development of Threema for Windows Phone to the next level. Stay tuned for more functional enhancements to be released in the next few months.

Enjoy the performance boost of this new version of the app!

Try it out: Threema Gateway

The wait is over – the new version of Threema for Windows Phone is here! Version 1.2.1 supports group administration: you can now create a group chat and add new group members. However, you can not remove group members at this point; this feature will be added soon. We have also improved the general appearance of the application. New colored avatars give a nice look and feel. The current update also adds a few improvements and bug fixes. We have not forgotten you – stay tuned!

We have published an update for the iOS version of Threema. On iOS, group administrators can now remove group members too. The second big announcement is that we have made Threema iPad compatible; the look and feel and user experience is now optimized for iPad screens. Besides, version 2.3 further improves accessibility support (VoiceOver). All in all the update 2.3 for iOS includes:

We just posted an exciting update of our Android app. Finally, administrators can kick members from existing groups. We also added a more feature-rich image preview that allows you to rotate, remove and sort multiple images before sending them. The emoji picker was thoroughly redesigned to enable direct access to emoji categories. Besides, a few new emojis from Unicode 7.0 and dozens of country flags have been added. Here's a list of new features and changes in version 2.3:

We have an iOS update for you:

Google just launched Android Auto. Threema was chosen as an exclusive launch partner of this exciting project. Android Auto notifies you about incoming Threema notifications on the car dashboard's head unit. You can listen to text messages via text-to-speech, and directly reply by voice input. Android Auto will be available for new models of all major international car manufacturers. 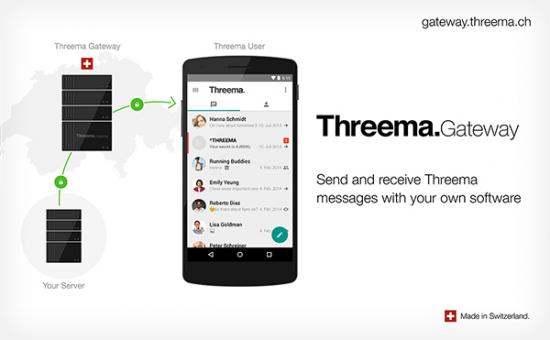 We've just launched our brand new “Threema Gateway” product. It allows you to encrypt, send, receive and decrypt messages directly from your own application. The code for integrating a Threema backend into your own software environment is available in PHP, Java and Python and released with an Open Source license.

This new pre-paid service is more feature-rich, versatile and cheaper than traditional SMS gateways. It offers the highest possible security you've come to expect from Threema thanks to its reliable end-to-end encryption based on the well reputed NaCl cryptography library. All IDs used for messages sent via “Threema Gateway” start with an asterisk (*) and consist of 8 characters in total. You're free to choose your own Threema ID. Example: *THREEMA https://gateway.threema.ch

This version is mainly a bugfix release. It also adds a few smaller improvements and features:

The voice message plugin was also updated to 1.1. It now allows you to preview recorded voice messages before sending them.